It’s a strange world at the moment. Shops and businesses are closed and people are staying in their homes and practising social distancing. We’re living through a situation that no one could have predicted this time last year; we were booking holidays, going out with friends and making plans for the future. Nowadays, we’re booking supermarket delivery slots, staying in and video conferencing with friends and putting plans for the future on hold.

Many people have been furloughed or have even been left unemployed. Those that are lucky enough to still in a job are largely working from home. At this moment in time, it’s hard to see past the doom and gloom.

That being said, there’s much we can learn about ourselves during this period of time. People are learning new things all the time, some of which simply small observations but others are quite enlightening. With that in mind, we’ve asked some of our colleagues to tell us what they’ve learnt about themselves in the last month or so. I should warn you… food plays a big factor here!

“I’m comfort eating and snacking all the time!”

Let’s face it, most of us can empathize with this. When we’re feeling down or going through a rough patch, we tend to comfort eat our favourite foods. Whether that is your favourite chocolate biscuit (or 10) or you’re favourite takeaway.

Aside from comfort food, a lot of us are also making the most out of the situation by learning some new recipes. Sometimes they can even go hand in hand with comfort food! It’s no coincidence that supermarkets have announced an increase in flour and baking sales. Sounds like many have taken the opportunity of baking cakes…

“I kind of miss my drive into work.”

Driving to work was a chance to gear yourself up for the day, make mental plans and even just unwind with a choice podcast, listen to the radio or the lasts album. It became part of your daily routine, which has obviously seen some drastic changes in the last couple of months. However, do we miss the traffic jams? Spoiler alert: no.

Many of us that are used to working a standard 9-5 schedule in an office or outside the home would not come across daytime tv on a regular basis, but more and more are tuning in as a way of unwinding or just coping with being stuck at home. Suffice to say, we’re not huge fans. Once you’ve watched one episode of bargain hunt or homes under the hammer, you’ve seen them all!

You may think to yourself – how is this possible? Well, with the current lockdown rules in place, we are allowed to go out once a day for some exercise and as that is one of the few reasons we are allowed out, we’re taking to it like in duck to water. Consequently, we’re walking more than usual; be it around the block, down to the park or using the many walking paths across the North East. All the while maintaining the 2-metre separation as per the guidelines, of course!

“It requires a strength of character to work alone, without your colleagues around you”

This hits home fast. Usually, you’d be spending every day surrounded by your work colleagues, developing friendships, having a laugh and working together towards a common goal. These days it’s much harder to keep this going due to the social distancing rules. Obviously, we can use communication tools to stay in touch and continue to work together, but we’d be lying if we suggested it’s just as good. Nothing beats winning a game of ping pong during your lunch break or hiding the marker pen from your work bestie!

“Without the Internet, I’d be going out of my mind”

Most of us have an Internet connection at home nowadays, but arguably it’s never been as useful as it is now. We’re depending on the Internet to stay in touch, keep us entertained and keep a lot of us working from home. This mentality could bring monumental changes in how we live our lives going forward. For example, with streaming figures reaching record highs, there’s evidence to suggest that once the pandemic has ended, the film industry may adopt a new approach and begin releasing films online instead of at cinemas, or at the very least in addition to the cinemas. Which brings us to our last point…

While the current ongoing situation is a terrible one for all involved, let’s be frank about something: it would have been so much worse if it had happened 50 years ago. From advancements in medical care, vaccines, drugs and so on, to technological advancements that are giving most of the population reason to see the best in a bad situation, we’re in a position where, hopefully within a year or two, this will all be a terrible dream. Lives have and will be changed forever and a new normal is approaching, but we’ll come out of this stronger. 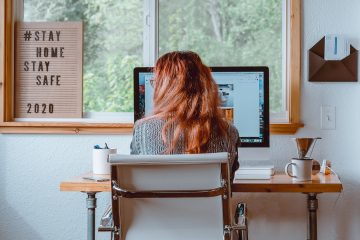 Work from home with Goldfish.ie

With what appears to be a second wave of the coronavirus pandemic approaching, more and more businesses are preparing for the eventuality of remote working once again. Earlier this year, many businesses quickly transitioned to Read more…

Keep Your Business Running With Quvu

Having the ability to manage your team from any location, not just countrywide but also worldwide, is made easy today thanks to Quvu, our cloud-based contact centre management solution. Seeing as you’ll probably be working Read more…

Goldfish.ie response to the COVID-19 outbreak

As I’m sure you’re all aware, we’re currently in the midst of a global virus outbreak the likes of which we have not been seen in modern times. It’s bringing a number of different challenges Read more…