Big thanks for iRadio for covering our Sack The Suit campaign for their Feel Good Friday new slot last week. It’s in aid of SVP – Society of St. Vincent de Paul Ireland. There’s been a great reaction to the campaign with companies from all the country getting involved and Read more…

Our ‘Sack The Suit’ campaign is proving a huge success, with companies all over Ireland signing up to donate clothes to St. Vincent de Paul. The campaign has attracted the interest of the media too. Here is our CEO Gordon O’Neill being interviewed on East Coast FM’s long-running morning show. Read more…

A couple of weeks ago we launched our ‘Sack The Suit campaign with Dropbox in aid of Irish charity Irish  St. Vincent de Paul. The response has been huge, with companies across the country getting involved. But we still need more. St Vincent de Paul are desperate for clothes and Read more… 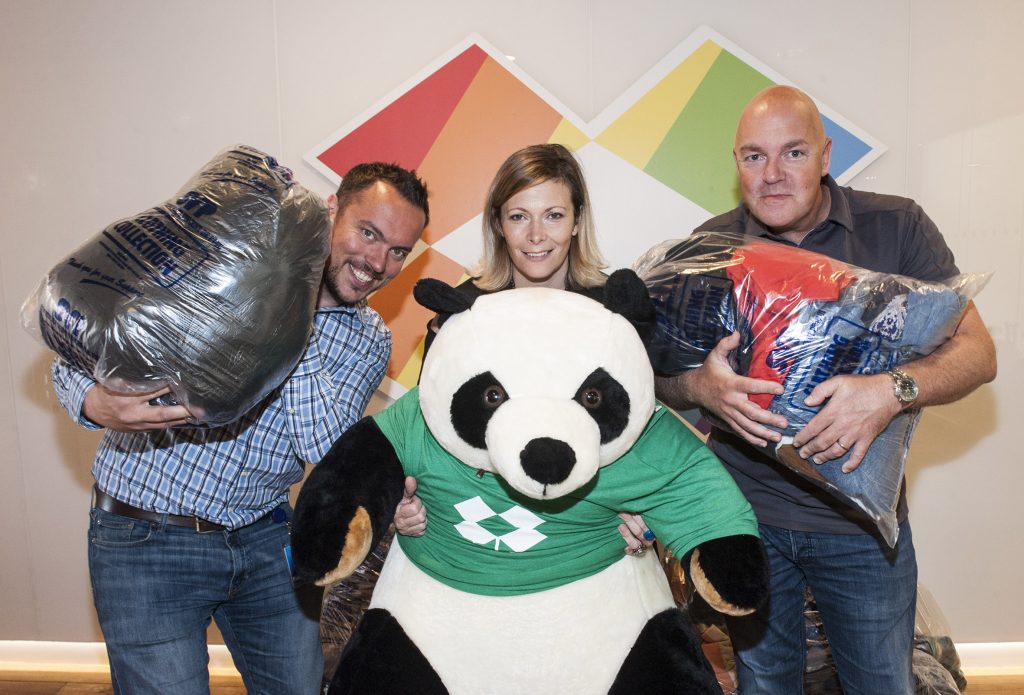 Pieter Jannssens, Dropbox’s Head of Mid-Market Sales, Central and Northern Europe with Nichola Mullen, Head of Fundraising for St Vincent de Paul and Gordon O’Neill, Founder and CEO of telecoms firm Goldfish.ie and Dropbox’s mascot ‘Panda’ in Dropbox’s European Headquarters in Dublin for the launch of the ‘Sack The Suit’ charity campaign, in aid of The Society of St Vincent de Paul.

15th August, 2016; Dublin, Ireland: With Ireland having an unusually warm summer, we are seeing people across the country sweltering at work in their traditional office attire of suits, ties and formal dresses. Thankfully help is at hand from Irish business telecoms firm Goldfish.ie, who are asking companies to modernise their dress-codes, by ditching rules that require staff to wear formal business clothes, and donating them to charity instead.

Catchily entitled ‘SACK THE SUIT’, the campaign is being launched across Ireland today. It calls for men and women alike to raid their wardrobe and donate their unwanted clothes to a good cause, the Society of St Vincent de Paul (SVP). The first company to join the campaign is leading file storage firm DropBox, who have already adopted an informal dress-code at their headquarters in Dublin and have just completed a clothes’ collection in aid of SVP.

END_OF_DOCUMENT_TOKEN_TO_BE_REPLACED

Time to sack the suit

Summer is here and whilst many companies temporarily allow a relaxation in their dress codes during the warmer months, at Goldfish.ie we’ve decide to permanently adopted a casual dress code. Our CEO Gordon has wholeheartedly taken this approach on board by even getting rid of all his suits and ties. Read more…

By Simon Palmer, 4 years ago